Meanwhile, let us have a sip of tea. The afternoon glow is brightening the bamboos, the fountains are bubbling with delight, the soughing of the pines is heard in our kettle. Let us dream of evanescence and linger in the beautiful foolishness of things.

Since we don’t really have a language for naming commons – real commons- they tend to be invisible and taken for granted. The commons are things that no one owns and are shared by everyone, such as shareware, the human genome, urban squares, forests, wikipedia, creative commons licenses, the commons of language itself, etc. Unfortunately, due to the dismal performance of corporate capitalism and government, countless public resources are getting privatised. In response, commoning sets forth a very different vision on human fulfilment and ethics, and invites people to achieve their own bottom-up, do-it-yourself styles of emancipation.

The concept of the commons is not a dogma, it is a political critique to the status-quo-system and a new way of managing resources.  […] Basically the commons is shared resources that a given community wants to manage for the collective benefit of everyone with a focus on fairness and sustainability of the resource. It is pioneering new forms of production, more open and accountable forms of governance, innovative technologies and cultures and healthy, appealing ways to live. It is a quiet revolution – organised, diversified and socially minded. (David Bollier: Think like a Commoner, 2014: 1–9)

Kurt Vonnegut: On the Shape of Stories

David Boillier, Think like a Commoner: A Short Introduction to the Life of the Commons (2014)

George Monbiot, Out of the Wreckage: A New Politics for an Age of Crisis (2017)

Antonis Rokas, Where sexes come by the thousands (2018)

Karen Barad, Meeting the Universe Halfway: Quantum Physics and the Entanglement of Matter and Meaning (2010)

Rebecca Solnit, A Paradise Built in Hell: The Extraordinary Communities That Arise in Disaster (2010)

The Dutch artist Bas Jan Ader, who disappeared at sea at the age of thirty-three, is often referred to as the “James Dean of contemporary art”. His idiosyncratic work boasts a distinct romanticism, centred as it is on themes of identity, vulnerability and frailty. He made a series of films and photographs dubbed the “falls”, depicting himself tumbling and stumbling in various scenarios. This striking 1972 piece follows in that vein: a row of six images show the artist having a solitary tea party under a cardboard box, propped up by a stick. The final frame shows just the box, which has fallen, trapping the picnicking artist within.

FALLING TOGETHER;
THE ON BEING PROJECT WITH KRISTA TIPPETT

“When all the ordinary divides and patterns are shattered, people step up to become their brothers’ keepers,” Rebecca Solnit writes. “And that purposefulness and connectedness bring joy even amidst death, chaos, fear, and loss.” In times of global crisis, we return to the conversations we’re longing to hear again and find useful. A singular writer and thinker, Solnit celebrates the unpredictable and incalculable events that so often redeem our lives, both solitary and public. She searches for the hidden, transformative histories inside and after events we chronicle as disasters in places like post-Hurricane Katrina New Orleans.

On the occasion of receiving the Wilbur L. Cross Medal for Distinguished Alumni, one of Yale’s highest honors, Donna J. Haraway gave a public lecture demonstrating the power of narratives that bring together biology, activism, and art. In the lecture, Haraway describes a series of “contact zones” that reveal practices for becoming worldly in a time of unprecedented environmental destruction.

A collage of Hollywood melodramas of the 1950s and 1960s, filmed directly from the television set. The constantly recurring motifs of suspense and clichés of plot make it possible to move seamlessly among scenes from different films with different protagonists: uneasy sleep, getting up, listening at the door, turning on the lights, being startled, etc.

In the montage, the movements and gestures of the actresses – stars like Lana Turner, Tippi Hedren, and Grace Kelly– seem choreographed and planned for each other. The soundtrack by Dirk Schäfer supports this effect with connecting passages of sound that imitate the stereotypes of the genre. The treatment concentrates the dramatic shift from the familiar to the eerie and shows how women become the victims of the voyeuristic glance of film. 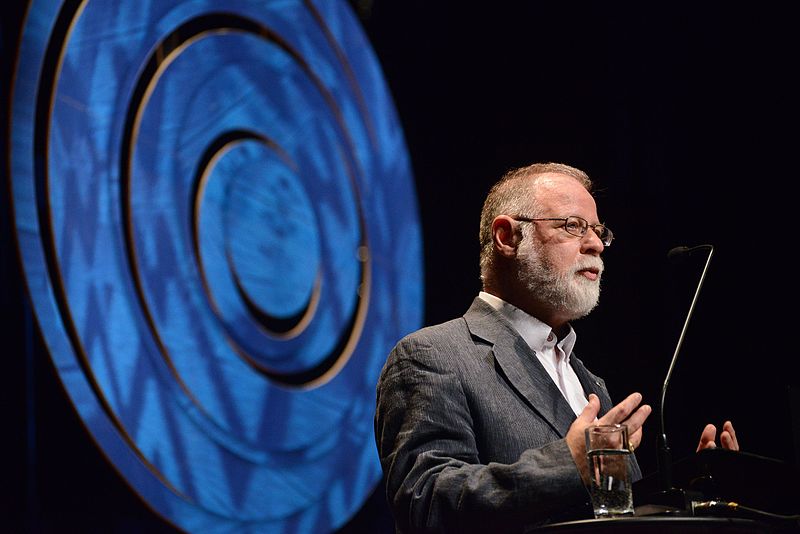 THE CITY OF WORDS

“This Sunday night on Radio National, the Big Ideas program begins a new series of six programs: the Massey Lectures, first broadcast on the Canadian Broadcasting Corporation last year. The lecturer is internationally acclaimed writer and translator Alberto Manguel, who has written novels, film scripts, essays and a range of non-fiction works. He has edited anthologies on a variety of themes including A Dictionary of Imaginary Places, A History of Reading and, more recently, The Library At Night.”

The Massey lecture series is titled The City Of Words and in it Alberto Manguel turns our attention to a variety of literary sources from the biblical story of the Tower of Babel to the Epic of Gilgamesh; from Don Quixote to Stanley Kubrick’s film of 2001: A Space Odyssey and many more. The aim is to address the problem of how we are to live together in this complex, multi-voiced world, where many of the voices are raised in anger and in fear.

WHAT IS THE COMMONS?

David Bollier is an activist, writer and policy strategist who studies the commons and tries to protect it (‘the word commons’ is singular and plural). According to Boillier the commons are shared resources that a given community wants to manage for the collective benefit of everyone. Concepts like fairness and sustainability are not abstract goals in themselves, but necessary tools in both resource management, community building and the sustenance of the social fabric.

THE COMMONS
INTERVIEW WITH DAVID BOLLIER

David Bollier, one of the co-founders of the Commons Strategies Group, gives examples of commoning.

In this innovative animation, filmmaker Laura Hanna, writer Gavin Browning and video artists/animators Dana Schechter and Molly Schwartz examine the concept of The Commons as a means to achieve a society of justice and equality.

THE DEEPER MAGIC OF THE COMMONS

A discussion of the Commons, with contributions from David Bollier, George Caffentzis, Massimo de Angelis, Peter Linebaugh, and Dr. Bones.